To this day we still strive to be pioneers with a strong focus on research, development and innovation having designed and constructed, what we consider, to be the first working prototype of an zero emission electric deadweight roller in 2018. Our innovation continues with the development of a remote operated 120 vibratory roller in 2020 -2021, eliminating hand arm and whole body vibration for the operator, reducing noise at the operators ear and eliminating the need for a operator to be placed in potential danger when having to provide material compaction in enclosed spaces or other potentially hazardous situations.

Over the past 50 plus years CRH has won a hard-earned reputation for providing quality equipment backed up by outstanding service, evidenced by the company’s accreditation to ISO9001 back in 1996. The company went on to achieve ISO14001 approval in 2005 for our environmental management system  and OHSAS18001 accreditation for health and safety in 2010 which has since been superseded by our registration to ISO45001 in 2018.

From our eight regional depot locations we are able to provide a truly national coverage with a local service level. Each location continues to run on the philosophy first envisaged by our founder and Chairman all those years ago – with a strong commitment to excellence in service, and a dedication to ensure our equipment is right first time and on site at the time we promise.

David Wales has been Chairman of CRH since its inception on 15th January 1965. He is therefore the longest serving employee of the company. Despite retiring as an active participant in the daily management of the business in May 2015 he maintains a keen interest in the company’s activities.

Neville Thomas,  Managing Director, originally joined the company as an outside service engineer. He later joined Benford and became Development Engineer and Service manager, before returning to CRH as Technical Manager and then Technical Director. In 2005 Neville took over as Managing Director.

Vikki Wales joined the company in 2012 to manage the implementation of a new, integrated hire and accounts system and later undertook her present position as a Director. She had previously worked for Ringway, RCS, WSP Civils and Amey.

Peter Austin was apprenticed at Witham Depot in 1983. He worked his way up to Workshop Manager, and in 2005 accepted the job of Technical Manager, based at Evesham, when Neville became Managing Director. In July 2007 he became Technical Director.

Jeff Aldridge joined the company as Technical Sales Representative at Wigan depot in January 1999 but left to join another company in 2001. He rejoined us, as New Business Manager in January 2006, and became Marketing Director in July 2007.

Dean Watkin joined CRH having worked for Birse and A Plant and in 2012 took over the role as the HSEQ Manager responsible for the company’s quality, environmental, and safety policies and practice. Dean holds a diploma in applied Health and Safety awarded by NCRQ and is also a member of International Institute of Risk and Safety Management and a graduate member of IOSH.

Adam Hunt joined CRH in February 2013 as an Area Sales Manager for Sheffield depot after working for a number of plant and tool hire companies previously. In 2017 Adam took on a newly created role as National Account Manager. As of March 2021, Adam has taken full responsibility of the sales department and all aspects of sales within CRH.

Tom Parkes joined CRH as an apprentice fitter in March 2011, since completing his apprenticeship Tom’s career within CRH has taken off, first as a fitter, then workshop foreman before becoming the depot manager at our Andover depot. Tom then progressed to become the Company’s first National Transport Manager in March 2020 since then he has been instrumental in the Company’s successful accreditation to FORS Silver. Due to Tom’s unique experience within the Company his role has, as of March 2021 been expanded to that of the newly created National Transport and Operations Manager.

Will James joined CRH in September 2013  having worked for Terex for many years, he became the Office Manager at our Evesham Head Office in December 2016. In recognition of the work Will does in administrative support, not just to the Evesham office but to the whole Company, Will’s role changed as of March 2021 to become the Company Secretary, a role he has taken over from Vikki to allow her to concentrate on looking after the Company’s finances 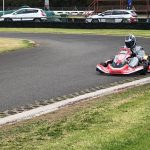 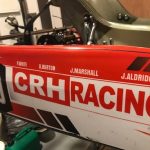 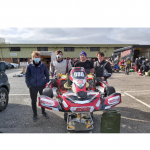 New addition to the hire fleet

We Have Increased Our Fleet